This unofficial document is a quick overview of how the mGear Shifter workflow works. It is meant to describe all the parts, so as you go through the tutorials and documentation, you have a full sense of everything.

This document is still a messy work in progress! I started writing it in mGear 2.6.1 just before mGear 3.0.3 was released. I'll update this page, as I continue to learn. I'll improve the illustrations too.

If you have any questions about my workflow, you can find me on the mGear Forums. The entire community there is great for answering questions.

How to install mGear: tl;dw: use Maya.env and add this line to point to where you put the mGear folder. Don't copy/paste the scripts into your Maya prefs. Here are my example paths, as I develop my pipeline using Dropbox. The final configuration will be on our studio's network.

HELP! See below for some answers to things that can go wrong.

FIRST THINGS TO KNOW About mGear 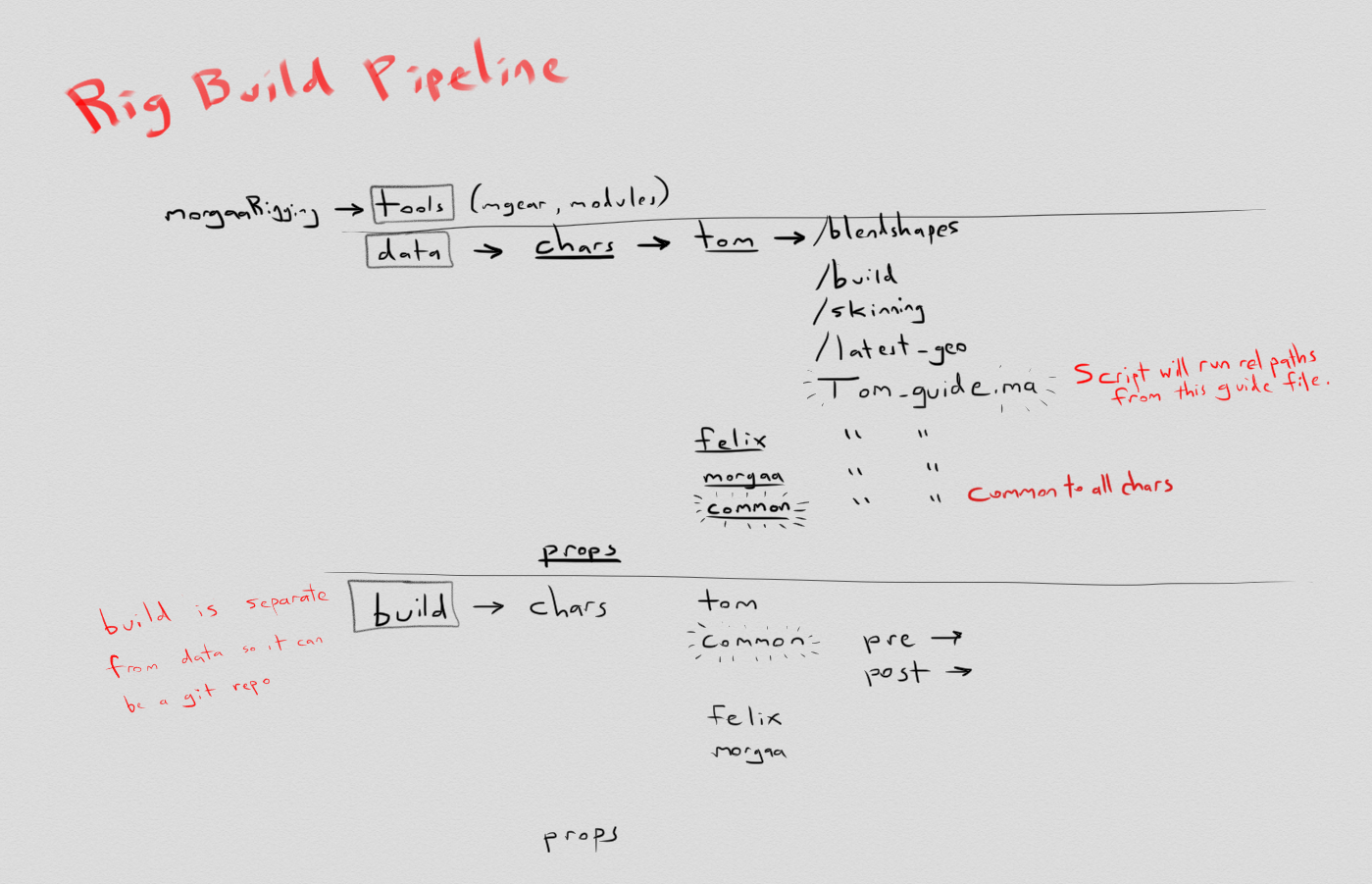 A sketch for how I'll organize pipeline data. Inside each character will be blendshapes, skinning, the latest_geo, and any other stuff. By putting the data inside a character, it is easier to clone for a new character. There will also be a "common" character folder, where build scripts will live that will run on every character.
Shifter build scripts will be kept under a separate "build" directory, and tracked as a separate git repo.

The best way to install mGear is by putting it in a directory that can be accessed by your artists, and then pointed to by using the Maya environment variable MAYA_MODULE_PATH = /your/directory/here/foo

If you are creating custom modules, you should store them in a separate directory of your choosing, and then point to it in your Maya.env by using MGEAR_SHIFTER_COMPONENT_PATH = /your/directory/here/foo

Consider that in your studio, in the long-term, you will like be using mGear on multiple projects, supporting different versions of mGear, or customizing modules that are specific to a project.

Import the face template and place it (script this or improve the hooks?)

Do whatever custom clothes and hair needs rigging

In this section, I'll try to answer some questions that I got hung up on at first. When you are doing "Data-Centric rigging" like with mGear and Shifter, there is a level of complexity, and there are bound to be things that go wrong.

Q. I renamed all my controls and my custom icons are gone!

A. No problem. Custom icons are stored by name. "[NAME]_controlBuffer". If you look under your guide, there is a group called controllers_org. Your icons are probably still under that group, but named with the old control names. You can simply rename the objects under the controllers_org group to match your new controls. The next time you build it will be fixed. You can also import or manually add shapes into that group.

Q. I made some gimmick joints and skinned them, but the next time I build, they are lost!

A. Gimmick joints are not stored in the guide. You have to add them during the POST build stage. You can add them manually when you are first testing and skinning them. But once you are happy with them, add a POST step and use mgear.rigbits.addBlendedJoint(). There are 2 videos where Miguel shows how to create Gimmick Joints, but he doesn't explain how to rebuild them using Python until "Data Centric Rigging 014: Gimmick joints custom step & first rebuild"

Make sure to build your Gimmick Joints before importing your skinning, otherwise the joints won't exist yet!

A. mGear Shifter is an open source rigging framework, and you can run any Python you like during your build process. So YES it is possible, but you will likely have to do some scripting or create your own custom modules. The existing Shifter modules do not cover every possibility you might want. As of January 2019, there are also very limited facial features, so you will have to design and rig a lot of your own face components. mGear is not a magic bullet for every rig you can imagine, but it is open enough that you can easily customize it to suit any needs.